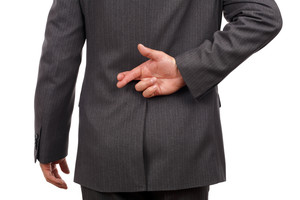 Les Greensides, Security Manager at Agenda Security Services says “The fact that Fraud Prevention Officers have taken this unprecedented step to warn students of the possible consequences of making false claims on their CVs highlights just how prevalent this offence has become. The willingness of students to commit this kind of deception, coupled with the ease of creating or obtaining false certificates and other documents on-line, means that potential employers can no longer afford to accept stated qualifications at face-value.

Making false claims on a CV is not a �white lie’. Apart from being a criminal offence it is also a red-flag in relation to the candidate’s integrity. Further, engaging an employee and allowing them to undertake tasks for which they are not properly qualified can have serious and far-reaching consequences for the employer too – just ask the health authority who allowed an unqualified �doctor’ to perform surgery

When checking qualifications, Agenda Security Services go direct to the issuing body to check every detail of the award that the candidate claims to have attained. This is the only way that potential employers can be confident that the person standing in from of them has bona-fide qualifications from a bona-fide institution.”

Fraud prevention officers have sent a new guide to every university in the country warning students they could face jail for telling “white lies” on their CVs to make them more impressive.

Entitled Don’t_finish_your_career, the guide warns that embellishments like inflating grades and inventing extra-curricular activities can be classed as “fraud by false representation” and carry a maximum 10-year jail sentence.

It says that cases referred to the fraud prevention service CIFAS stay on file for six years, so applicants might also be flagged up if they attempt to apply for other jobs.

Students are warned: “Your dream job asks for a 2:1, but you’ve got a 2:2 – so you just make a little change on your CV. You’re worried you don’t have enough work experience – so you pretend your summer of trekking through Nepal was actually spent working at a local solicitor’s firm.

Simon Dukes, chief executive of CIFAS, added: “Ignorance isn’t an excuse if you get caught out”.

As competition for work intensifies – with an average of 85 students now competing for every graduate job – employment-related fraud has increased. CIFAS figures show 324 people were prosecuted in 2013 for all forms of fraudulent applications, compared with 205 in 2012.

The guide says one former student was jailed for 12 weeks after lying about his qualifications when applying for a job as a temporary teacher. He claimed to hold a master’s degree but later admitted to buying it online.

The guide also cited the case of a woman jailed for six months for making up references and lying about having two A-levels.

Helen Kempster, consultant for the University of London’s Careers Group, told The Daily Telegraph: “It can be tempting to tell a �white lie’ but this leaflet makes students aware that there can be serious legal repercussions.”

To read the guide in full visit: Don’t_finish_your_career